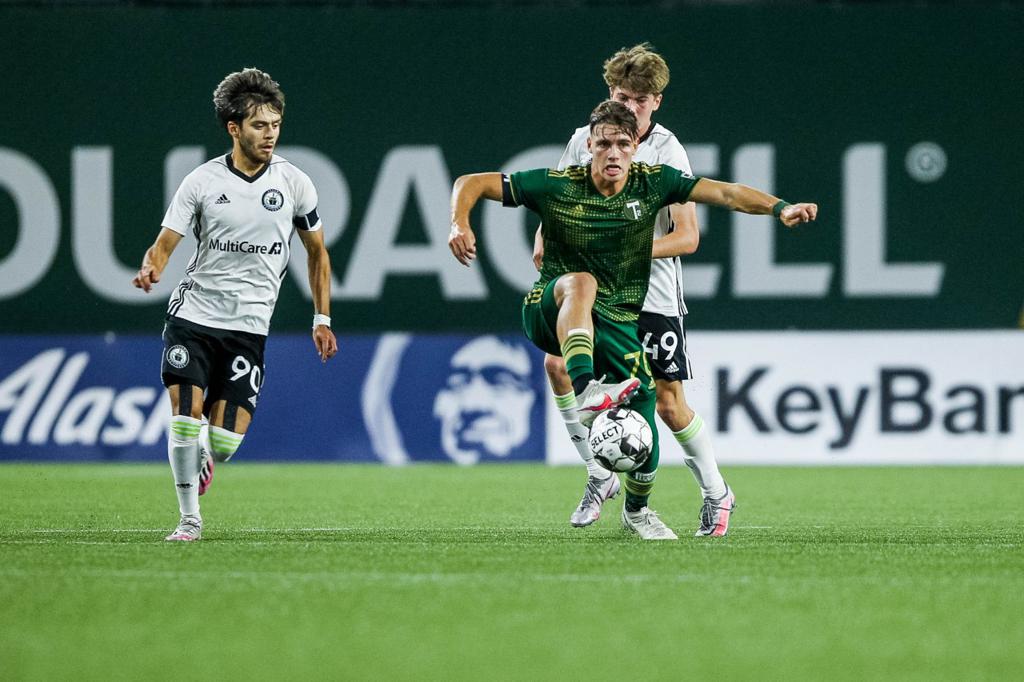 PORTLAND, OR. -  T2 earned their third win in four contests, defeating the Tacoma Defiance 3-1 at Providence Park on Thursday night. Portland entered the second half up 1-0, but Tacoma tied it up in the 47th minute. T2 quickly responded in the 49th minute when Marcus Epps found the back of the net for the third straight match. Jorge Gonzalez provided insurance with a goal in the 75th minute, completing his second brace of the season.

Group A Play
With the victory, Portland jumped into third place in Group A and evened up the season series against Tacoma 2-2. T2 will have an opportunity to best their rivals for a third straight time on September 27 when the clubs face off at Cheney Stadium.

Key Performances
Gonzalez followed up with a brace, improving his season total to a team-best eight goals. Tonight was also the fourth match in a row Gonzalez has produced at least one score. Epps notched his fourth goal of the season in the match. Goalkeeper Hunter Sulte earned his first win of the season.

Returning to Play
Williams Velasquez started his first match since July 18, logging 77 minutes before being replaced by Isaac Homer. Ken Krolicki made his first appearance since August 8, entering the game in the final minute for Carlos Anguiano.

POR – Marcus Epps, 49th minute: right footed shot from the center of the box to the bottom right corner.

POR – Jorge Gonzalez, 75th minute: converts the penalty with a right footed shot to the top right corner, logging his second brace of the season.

Next Game
Next up, T2 will travel to face the Tacoma Defiance at Cheney Stadium on Sunday, September 27. Beginning at 1:30 p.m. (Pacific), match against Tacoma will be streamed on ESPN+.

On his thoughts on match against Tacoma…

“Getting a few guys healthy and keeping them healthy made a difference for us. We’ve had guys beat up through this stretch. Stephanie has done an incredible job on the medical side and Dan on the performance side of keeping these guys ready and available. We started the game well and were able to claw ourselves back very quickly once we conceded in the second half. We had quite a professional performance to see it out to the end. There were a number of chances that on a different day with us having 11 or 12 shots inside the box, maybe we score a few more goals.”

On his thoughts on facing Tacoma again on Sunday…

“We have two days between this match and the next to get the guys turned around, which will largely be based on recovery. It’s a tough schedule, but the guys have shown resilience all season. Now this will be the decider. We’ve played each other four times. They’ve won at home twice and we’ve won at home twice. Now we go up there for the decider.”