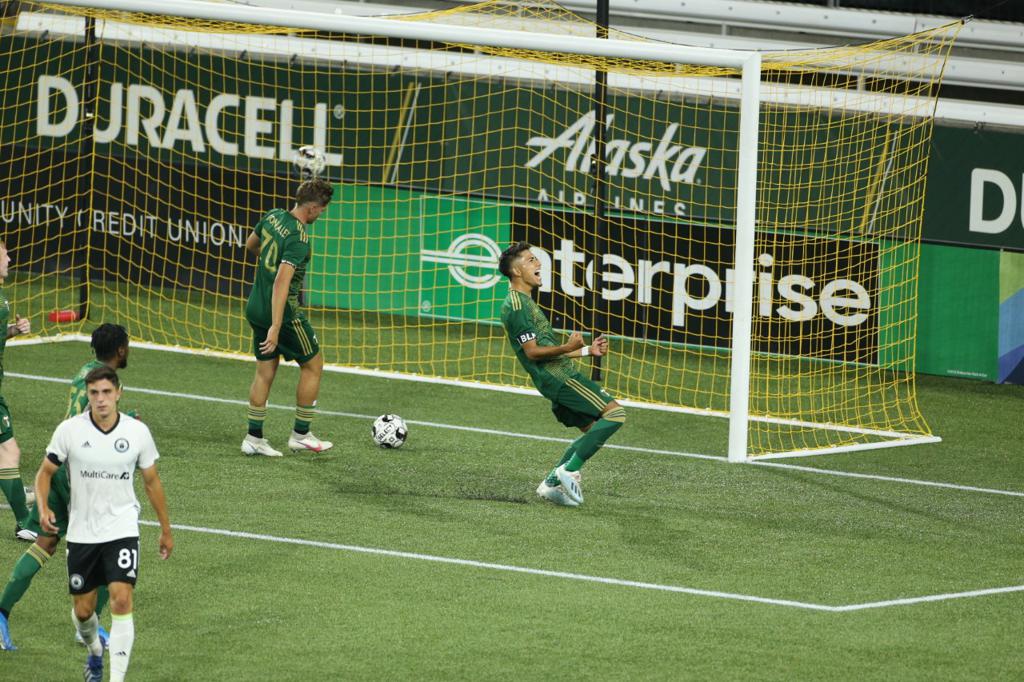 PORTLAND, Ore. – T2 earned their first win of the season, defeating the Tacoma Defiance 3-0 at Providence Park on Wednesday night. Portland scored three goals in the opening 24 minutes of the match as Jorge Gonzalez tallied his first career brace and Giovanni Calixtro recorded his first goal and assist of the campaign.

Gonzalez Returns with a Bang
Gonzalez returned to the starting lineup for Portland after missing the past three matches and quickly netted a brace. With his two goals in the match, Gonzalez increased his season total to a team-best four goals. His first goal of the night was slotted into the left corner of the net in the 18th minute. Aedan Stanley tallied his second assist of the season on Gonzalez’s first goal. Gonzalez added his second goal of the night with a left-footed shot from close range in the 24th minute. Calixtro assisted on the play, recording his first of the season.

A Night of Firsts
Gonzalez’s multi-goal game was one of many firsts on the season for T2 during tonight’s match. Calixtro added his first goal of the season on a penalty kick when Stanley was fouled in the box in the 21st minute. It was the first penalty-kick opportunity and first conversion on the season for T2. In addition, Calixtro notched his first assist of 2020 in the match. Goalkeeper Jake Leeker finished with four saves, helping Portland earn its first clean sheet of the season. The night culminated in the first win and first points of 2020 for T2.

POR – Giovanni Calixtro, 21st minute: converts the penalty with a right footed shot to the center of the goal.

POR – Jorge Gonzalez (Giovanni Calixtro), 24th minute: left footed shot from very close range to the center of the goal. Assisted by Calixtro with a through ball following a fast break.

Next Game
Next up, T2 will face off against the Tacoma Defiance for a second of consecutive match at Providence Park on Saturday, September 12. Beginning at 7 p.m. (Pacific), the match against Tacoma will be streamed on ESPN+.

On his thoughts on the match against Tacoma…

“We talked a lot in the locker room after the Reno game. Obviously a very difficult result, the last one. We had a few good meetings with the guys this week and talked about how that match was a bit of an anomaly. We had a real good spirit about us, even though the result didn't go our way it was more getting back to that and recognizing that it’s a completely different game. This is a game against Tacoma, there is more to it in every sense no matter how our season is going. They need to be different and feel different, knowing that we were going to play them again in quick succession. We wanted to make sure we give a good account of ourselves in the first game.”

“It was good to have Jorge back, he had a little injury that he's been dealing with. For him to come in and put in the shift he did was outstanding. He was dangerous going forward, he took his goals well so credit to him. He probably didn’t want to come out of the game at that time, but having had that absence we want to keep him fresh for the weekend. As for Jake, it was a really steady performance from him. I thought his hands were really safe and he didn’t cough things up. He made a lot of right decisions and for large parts of the match flew under the radar, which is really what you want to see. He made some good saves, the saves he needed to make to keep the clean sheet, which is really important.”

On his thoughts about next match against Tacoma on Saturday…

“I think obviously there is a positive vibe in the group right now in terms of a single result. We've got to do the same thing that we've done when the results haven't gone our way, which is to be honest about our performance whenever results don’t go our way. When the performance has been pretty good and we can take a lot out of it. We've had some results go against us where the performances haven't been as good. We go back and go through the game and look where we can improve and look at the things we can do better so that we are ready for this weekend.”